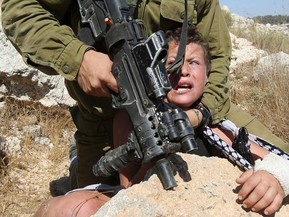 Israeli soldier trying to arrest an 11-year-old Palestinian boy with a broken arm in the West Bank. (CNN)
​Journalists and media creators choose different linguistics depending on their ideological point of view towards the same event as well as their audience’s.  According to Gee (1999), "when we speak or write we always take a particular perspective on what the world is like" (p.2). Language as well as communication itself are tools use to informed and control the masses. Ideology is another factor that must be linked to misrepresentation in the media. Ideology forms social beliefs shared by a group and forms new social opinions, which get stronger with the encounter of the situations and events.
Printed media is use as a tool for producing attitudes, "are not simply vehicles for delivering information. They guide the ideological stance of the reader" (Reath 1998, p.50). Another factor that creates misrepresentation in the media is access. In some countries, you have more or less opportunities to represent your opinion in the media based on the limitations imposed by the government or the powerful elites.  Both of them can have a great influence in the structure of the language used in media and society.
The language used by journalist can evoke different responses from different readers. A journalist or media outlet can impact a reader's understanding and therefore opinion on any event or subject that is discussed. Headlines and snippets define what is important to the media outlet or journalist and serve as a summary of the event to the audience. The significance of the headline and intro paragraphs has increased in recent years as readership often consumes only this much, of a longer more in depth article. Van Dijk (1985) (p.84)
​In any representation of events in a text, as Fairclough (1995b) described, writers have to decide "what is included and what is excluded, what is made explicit or left implicit, what is foregrounded and what is backgrounded, what is thematized and what is unthematized[sic], what process types and categories are drawn upon to represent events, and so on" (p.104).
This paper was written to explain how Israel is misrepresented in the media. For that purpose, I chose the worldwide know media news network CNN. CNN has been accused for being bias in the Palestinian-Israeli conflict. For the past months, there have been aggressive attacks between Palestinians and Israelis. CNN, instead of informing what actually happens, it portrays only one side as the aggressor, Israel.
There are many examples of the bias mentioned above in CNN's reporting. In April 14, 2015, "Israel retaliates for Hezbollah attack" and in April 15, 2015 headline "Israel launches air strikes in central Lebanon." These two events are represented in a way that puts Israel as the aggressor, yet CNN did not include the reason behind the air strike, as a response to Hezbollah's initial attack on northern Israel.  Instead, the headline for the incident was "Violence flares in Gaza, along Israel-Lebanon border," without identifying the attacker.
An April 16th headline said: "Israelis strike Arafat's guard unit's headquarters," when Israel was responding to Palestinian mortar fire upon the community of Sderot. Once again, no headlines regarding this part of the event were written. CNN reported the event as an aggressive strike by Israel. Instead of the fact: Palestinians attacked Israel, which defended itself.
"when we speak or write we always take a particular perspective on what the world is like"  -Gee- 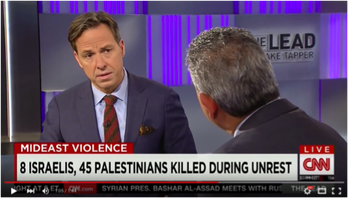 8 Israelis, 45 Palestinians killed during unrest.
The list of CNN headlines regarding the Palestinian-Israel conflict:            These headlines used verbs describing Israel as the attacker for each event. On the other hand, there are zero headlines, which indentify Palestinians as attackers. CNN has proved their bias not only with their headlines but also by not taking a disciplinary action against Diana Magnay, who called Israelis "scum" on her twitter account around the time she was reporting for CNN. Magnay twitted:” Israelis on hill above Sderot cheer as bombs land on #Gaza," she wrote, "threaten to 'destroy our car if I say a word wrong.' Scum."
On November 18, 2014 two Palestinians went to Kehilat Bnei Torah Synagogue in Jerusalem and killed four Israelis during their prayers. Both Palestinian were killed in a gunfire exchange with the police. CNN claimed that the massacre took place in a Mosque, and reported the death as "Four Israelis and two Palestinians," not taking into account that the four Israelis were praying and the two Palestinians were killed by the police after initialing shooting four Israelis.
The words that journalists and media outlets use have greater impact and implications than one can initially imagine from a potential small news story. In regards to something like the Palestinian-Israeli conflict, there are demands made by citizens on how the United States should respond and retaliate in regards to these events. Whether it be through public denouncing of the event, to defunding either state, to take up war crimes in the United Nations.  Journalists and media outlets have a great responsibility with the audience. Each word they choose to describe a conflict or event can make the difference between a reader being supportive to the cause or being against the cause. Journalists face ethical dilemmas their whole career, when reporting they need to leave their opinion and personal believes aside. Although, it is impossible to be one hundred percent objective and impartial. Journalists have the obligation to try their best, therefore they always face dilemmas, in which they need to work upon.  Governments are also responsible on how media is displayed. In some countries, as I mention above, it is not allowed to write or report an event that goes against the governments point of view. This type of influence in the media not only takes freedom of speech away from the reporters but also takes away the freedom the audience to know the truth. Audience also have the duty to inform themselves, and not only go to one source to get their information to create their own opinion or believes, but they should actually try to inform themselves from different media sources with different views in order to get a more objective understanding of events. Facts, are always the same, the issue is how audience and journalists interpretive and portray them and how they use them in ways that the news become bias. An ethical question that comes up is if the government should be in charge of regulating the medias and make it more facts related instead of being a bias media or should the media auto regulate themselves?